The former home of Frederick, Lord Leighton is a stunning example of the period and worth seeing for the Arab Hall alone.

Modest is not a word that readily comes to mind when you first set eyes on Leighton House. The former studio and living quarters of the 19th century artist Frederic, Lord Leighton, Leighton House is an artist’s fantasy playground come to life.

But who needs modesty when you have the funds and imagination to build yourself such a stunning abode? Leighton House is absolutely breath-taking, a bold fusion of styles with both eastern and western influences to the fore.

Of particular interest from an architectural perspective is the stunning Arab Hall with its proud dome, Islamic tiles and beautiful mosaics. It is a genuinely jaw dropping sight and should not be missed under any circumstances.

The house, the work of the architect George Aitchison was built to Leighton’s exact specifications and is said to recall the palace of La Zisa in Palermo.

At the time that work began on the house, Frederic Leighton was one of the most famous artists in Britain. Leighton was born into a medical family from Yorkshire. His grandfather had been the waiting physician to the Russian royal family and the family had grown wealthy while in Russia.

This wealth allowed Leighton to live a life of relative luxury and gave him the funds to pursuit a life in art, not always the most lucrative of professions.

By the 1870s, Leighton was at the height of his success, with Queen Victoria among his customers and the post of President of the Royal Academy of Arts to his name.

Away from the glitz and glamour of elegant society parties however, Leighton appeared to live a lonely life, unmarried and with no children to his name. Not surprisingly rumours about the artist’s sexuality circulated but Leighton, a secretive man who valued his privacy, gave nothing away and no diaries or revealing letters have been found to shed light on the issue.

Not surprisingly, the house has been feaured in a number of films and television programmes including Brazil (1985), Nicholas Nickleby (2002), the spy series Spooks and music videos by The Stranglers “Golden Brown” and Spandau Ballet “Gold”.
Leighton House is open daily except Tuesdays from 10am to 5:30pm with last entry at 5pm

If you are looking for more attractions in Kensington, London click the following link: https://www.timeout.com/london/things-to-do/kensington-area-guide

If you would like to know more details about the house including opening times and admission prices, click the following link: https://www.rbkc.gov.uk/subsites/museums/leightonhousemuseum1.aspx

Giz and Green Pop Up opens at Passo
4th August 2020 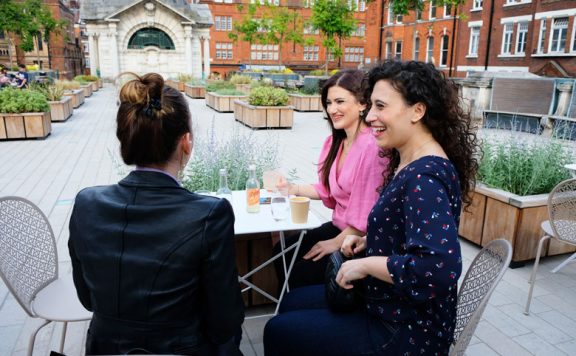