The 10 Most Instagrammable Cafes and Restaurants in London

Discover Instagram heaven with City Countdown's guide to what's hot and what's not in the world of London's cafes and restaurants. Peter Gray reports.

Admit it – when was the last time you ate food while it was still hot? Can’t remember? Blame it on Instagram. Cold food is an occupational hazard for instagrammers.

I mean, how can anybody possibly eat until they’ve taken photos of their food from every conceivable angle, right? You’re not doing it for you, after all. This is the price you pay for being a member of the social media age. Yep, in 2019, we’re all #eatingfortheinsta.

So, in order to make it easy for you, here’s City Countdown’s guide to the 10 Most Instagrammable Cafes and Restaurants in London. 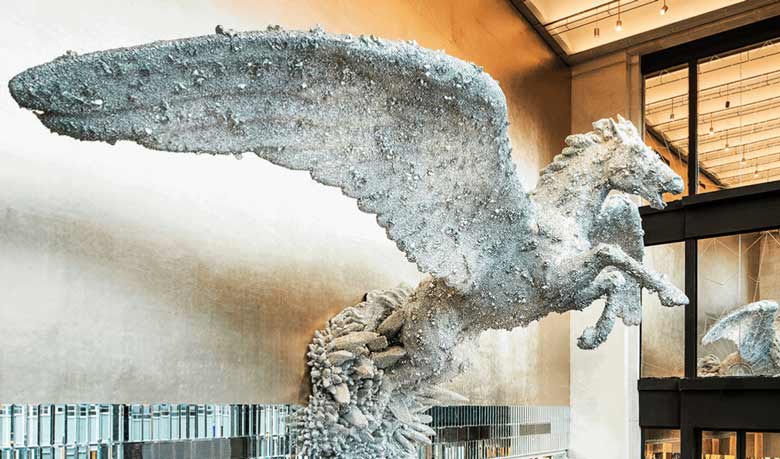 1. The Brasserie of Light (Selfridges)

Frankly, there are just no words. Fortunately, the same cannot be said of pictures. The team behind the restaurant have thrown the proverbial kitchen sink at it, and boy does it show. There’s tasteful bling in almost every corner, and if that wasn’t enough, there’s a jewel encrusted horse hanging overhead.

Damien Hurst’s Pegasus is so awe inspiring, so outrageously spectacular, that it pretty much settles things. The Brasserie of Light is London’s most instagrammable restaurant – bar none.

The Elan has been featuring prominently in lists of the 10 Most Instagrammable Cafes and Restaurants in London for the last few years.  However, the team behind the venue have really taken it to another level with their fourth floor cafe in Selfridges. It’s the flower walls that people come for, but the whole thing – the grey leather seating, marble coffee tables, feature lighting and stunningly photogenic food – all work superbly well.

The latest in a series of openings by Antipodean coffee masters Daisy Green, the interiors of Heddon Street’s Little Green are just breathtaking. The venue has more in common with a top art gallery than with a foodspot, with eye-catching seventies inspired art and bling furniture all totally on point. The café opened in November but we’ve already noticed a trickle of influencers starting to take up residence. Go while you can still find a table.

Dominique Ansel’s Elizabeth Street cafe is simply droolworthy. Ok, it’s not really a cafe, it’s a bakery, but it has the sheen of a top eaterie and the wall to wall influencers to match.

From the floral display at the entrance, to the luxurious leather interior seating, to the colourful garden terrace, this bakery is an Instagrammers paradise and the cakes are not bad either.

Instagram heaven? A cafe in an H&M? Are you sure?! Yep, there’s no mistake. The Pleat Cafe is drop dead gorgeous.

OK, don’t take our word for it. This is what influential food columnist Juti K had to say: “of all the cafes and restaurants based in clothing shops that I’ve visited, for character and wow factor, the Pleat Cafe wins hands down. The moment you step inside, you’re transported to a tropical oasis, which seems a million miles away from the fairly run of the mill H&M that it forms a part of”. See, told you.

The old reliable. No list of the 10 most instagrammable cafes and restaurants in London would be complete without dear old Peg. Indeed, even after being featured in every instagram blog from here to Timbuktu, the Elizabeth Street Bakery doesn’t appear to be losing its magic touch.

The cafe is so revered in Instagram circles, that Instagrammers come from all over the world just to get a glimpse of the place. You can see them outside, waiting in all manner of weather to get their moment with the Cake Gods. Well, you can hardly blame them. The shop looks divine, the cakes are as photogenic as supermodels and everything is pink and floral.

More information about the cafe can be found here.

The first thing you see when you get out of the lift at Alto, on the 5th floor of iconic department store Selfridges, is an eye catchingly instagrammable garden bench, with a stunning floral display around it. Above the bench is a sign which simply reads, “Alto by San Carlo”.

It’s a delightful introduction to the rooftop restaurant, the third of Selfridges’ restaurants to appear in City Countdown’s list of instagrammable cafes. Once you’ve finished with the bench, you’re immediately confronted by the cutest fairy light covered walk way. This is all before you’ve even set food in the restaurant! With that opening, it’s really not hard to see why Alto has made our list of the most instagrammable spots in London.

8. The Fortnum & Mason Bar at the Royal Exchange

This stunning city bar is often overlooked by Instagrammers although I’m not altogether sure why. It’s quite breathtaking and very instagrammable. The Royal Exchange is hardly a dump either and the two together make for a nice morning or afternoon.

More information about the cafe bar can be found here. 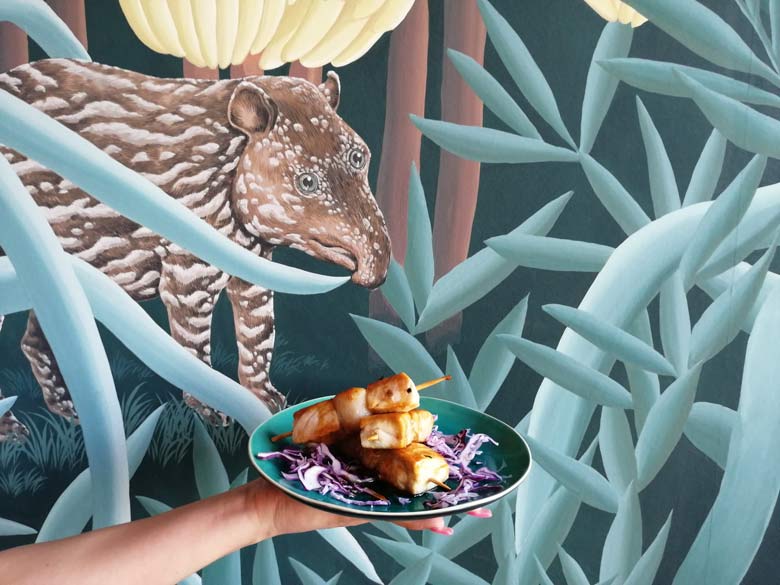 There’s something quite wonderful about this Japanese-Brazilian restaurant near Tower Bridge.

A snake slither along a branch just above my head, a monkey sucks on an orange opposite, and a leopard inspects a lamp fixture behind an unsuspecting couple. This is all happening on the wallpaper however the effect is quite magical.

The views are not bad either. We are sitting in a building that is a stone’s throw away from Tower Bridge and the floor to ceiling windows mean that we have the best views in town. Oh, did we say that they serve food too?! Go soon.

You can’t spend any length of time on Instagram without seeing pictures of this fabulous West London cafe. It’s pastel pink walls and floral arrangements have provided a stylish backdrop to approximately 99% of the London Influencer community in the last few years, and by the looks of things, the cafe is not about to lose its appeal anytime soon.

Saint Aymes gets pretty much everything right, from the beautiful pink and white flower displays to the classic gold framed prints of fashion icons, to the cute hanging flowers in the shop window outside. The music (a carefully curated mix of jazz and pop) only adds to the effect. The cafe is dog friendly to boot. Instagram heaven.

More information about the cafe can be found here.

The 21st century cafe has overtaken the pub to become the much vaunted ‘third space’. Cafes offer an alternative to the office or the stresses and strains of domesticity, providing a little haven where we can go to let our hair down and relax.

A great cafe can be like a second home, indeed, a home away from home. That’s why it’s so important that cafe owners focus on the atmosphere and ambience they create. This is equally true for restaurants too.

If you are looking for cool new places to discover in the capital, we hope that our guide to the 10 most instagrammable cafes and restaurants in London can help.

What : A guide for instagrammers